You have not become a genuine  owner of any piece of land you have paid for, and therefore, has no legitimate claim to it, until you have perfected all the title documents

One of the happiest days in one’s life is the day you are able to buy a piece of land, especially in any part of Lagos State. In fact, it is a landmark achievement that indicates that one is making headway in life. Besides, it is an investment that you will outlive and bequeath on your children. It is indeed, a worthy investment. Moreover, recent downtrend in the capital market has come to put investment in landed property ahead of stocks, which used to be the toast of investors.

Investment advisers are of the opinion that investment in landed property is not only for the purpose of having a roof on one`s head, but it is also a means of generating income for business expansion. Particularly, landed property is credible collateral when seeking loans from banks.

However, it is not enough to buy a piece of land; you have to be able to prove that you are the rightful owner. You need some government documents that confer legal ownership on you; otherwise all you have spent on the land could as well be described as a “dead investment. I n essence, you have to perfect the tittles. In these series of articles, we will be looking at these all important documents, the procedures for obtaining them and the likely bottlenecks to encounter in the process.

Before paying or any piece of land, the first thing for you to do is to find out what the status of such land is. How do you do this? If it a land that has once been surveyed by the owner, you can request for a photocopy of the Survey Plan and take it to the Surveyor-General’s office for charting. But, if it has never been surveyed, provide physical description of the land to officials at the Surveyor-General’s office who are in position to give you the current status of the land.

When you buy a piece of land from a private owner, obtain a receipt of purchase bearing the names of the family owing the land. Also go ahead to get lawyer who will prepare a Deed of Assignment where representatives of the family, yourself and some witnesses will indicate their names and endorse their signatures. Thereafter, take these two documents (Receipt of Purchase and Deed of Assignment) for Stamp Duty in order to give them recognition as legal documents. Although, stamp duty attracts payment of some chargeable fees, it gives authenticity to the documents and makes them binding on those whose signatures appear on them, since they are tenable as legal documents.

Another document you need once you have bought a piece of land from private owners in Lagos  State, as in any other part of the country, is the Survey Plan. This is a document that indicates the size, the location and the owner of a piece of land. Other features on the Survey are the coordinates, beacon numbers and it often specify I the land is free from any known government acquisition or otherwise.

When you contact a surveyor to prepare this document for you, make sure that he lodges the record copy (also called red copy) at the Surveyor-General’s office along Obafemi Awolowo Way, Ikeja. You can request the surveyor to give you a photocopy of the evidence of lodgment when delivering the survey copies to you. Normally, you should get eight (4 cloth and 4 paper sunprint copies) but you can request for additional copies.

Once the survey has been delivered to you, and you have ascertained that it is genuine, the next document you need is the Land Information Certificate, which specifies the status of the piece of land you have bought. This means that, with the Land Information, you will be able to know if the piece of land is either free, under acquisition or it is under government revocation, in which case, it is committed for specific purpose of public interest. Before explaining these three distinct statuses of the land, let us see how you can obtain this essential document.

Now that you have the survey copies, you will be requested to write an application addressed to the Surveyor-General indicating the name, the location and the plan number on the survey. This is attached to two copies of the Survey and submitted at the Surveyor-General’s office, Obafemi Awolowo Way, Ikeja for processing. It is expected that the processing will not take more than weeks complete, once the required fee has been paid.

At completion, a letter is written to you or your agent indicating the status of the land, which is most likely to be any of three statuses mentioned earlier. If the land is free, it simply means it is not under any known government encumbrance. Land in this category are found in traditional settlements and exempted from the Land Use Act (1978). Others are those that have been excised by the state government. This means that the government has decided to release them for residential development purposes as an expansion of traditional villages.

If your land falls under acquisition, it simply means that it is still belong to the state government by virtue of the Land Use Act (1978) which confers the ownership of all land in the state on the governor. By implication, all land in the state still belongs to the government, even though some traditional owners are laying claim to it and are re-selling for the purpose of development, especially for residential purposes.

Let me quickly add that the state government is not unaware of the fact that most of the land transferred to it by the Land Use Act (1978) been occupied, without permission, by those who wants to build personal houses. But to give a legal backing to these developers, the government has embarked on a process of Regularisation, which used to be known as Ratification. This is simply a process of buying back the piece of land from the government. This used to be a burdensome process and often lasted for a very long time until recently when the state administration decentralized the process and now takes between 30 and 90 working days to complete, barring all odds, either on the side of the applicants or official protocols. This has become easier by the computerization of the Lands Registry.

In 1980, during the first civilian administration in Lagos State, and inventory of illegal development within government acquired land (by Acquisition/Revocation Orders) was undertaken and about five thousand buildings were identified. This huge figure informed the Land Policy Administration which approved that all such illegal developments which were not blocking roads; drainage and not within committed areas should be granted building approval after the payment of =N=1,000 (on thousand naira only) penal fee among other Statutory Processing Fees. Only twenty percent of the affected buildings benefitted this policy before the Military took-over power government in 1984. In 1985, the need to accommodate the squatters increased as the acquired land became easily accessible to the low-income group for shelter. This brought about a review of the land policy on developments within Government Acquisition. The review gave birth to the process of Ratification (now Regularisation) of land holdings within non-committed Government Acquisition.

Initially, the Regularisation exercise was based on conformity with prepared Schemes/Layout for some of the Ratification Areas. Therefore, property Regualarisation was extended to areas without Development Schemes/Layout Plans, hence, the emergence of unplanned developments. Besides, the process became more cumbersome due to inputs of various agencies required in the determination of applications as well as lack of equipment, satellite imageries, development maps, and schemes for the areas. The new policy on Regularisation of title to land will enhance the development of properly planned neighbourhoods within Regularisation area and thereby discourage development of future blighted areas.

Another possible status that your land might have is to fall under revocation or committed. These are land areas that have been earmarked by the state government specifically for developments in public interest. In essence, the piece of land has been set aside for the construction of social infrastructure like schools, maternity centres, motor-parks, pipeline, gas-line, power-line, refinery, airport, free trade zone, residential estate or similar development for public use. No private development is expected to come up on such land and government will do everything possible to discourage prospective developers from encroaching on such lands, because one day, government bulldozers will put down such developments. You cannot afford to commit further resources on such land except you have considered such funds as being wasted. 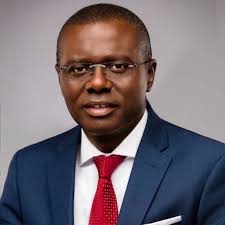 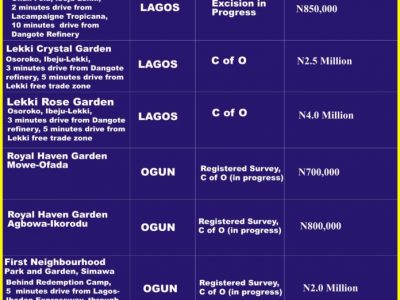 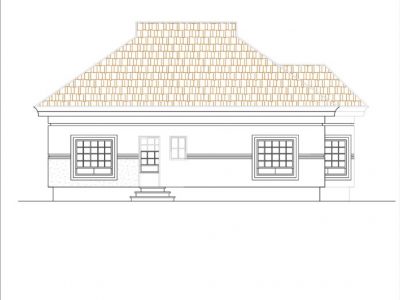